Ladies, does it ever feel like you have to slave away on a treadmill just to lose 5 pounds, but your husband or brother can just mention dropping 5 pounds and presto! It's gone.

When it comes to losing and gaining weight, men and women are not created equally, especially in how we store and eventually work off the calories we consume.

This means that we should change how we look at dietary and exercise recommendations based on a person's sex as well as body composition. But there's still a lot of generic “one size fits all” suggestions.

Here's what you should know about why men and women gain and lose weight differently.

“Men genetically have more muscle mass as a percentage of their body composition, which does result in an increase in resting metabolic rate,” says Tom Stickley, personal trainer turned exercise physiologist at the Eastern Idaho Regional Medical Center. “This means most males burn more calories at rest than females.”

Also, women generally have more body fat than men, according to a May 2011 article in the Journal of Nutrition and Metabolism.

But we don't know exactly how much of a calorie burning advantage this gives one person over another. That's mainly because everyone's body is different.

Here's an example from Tom:

Let's say we have a husband and wife. The husband weighs 300 pounds, and the wife weighs 200 pounds. They decide to make some lifestyle changes and begin to exercise as well as eat better. Let's say this same couple spends 20 minutes on a treadmill, and they both jog at 4MPH. The 300lb husband that weighs more is going to burn more calories than the 200lb wife time after time.

Why? Because he's much bigger and it takes more energy (calories) to power his bigger body. He will most likely lose weight faster than his wife based on this.

Let's say this happy couple eats around 2,000 calories a day. While this is low enough for both of them to lose weight, the male will lose faster simply because his caloric maintenance is higher due to his weighing more.

The bottom line: Men's and women's metabolisms”the systems like breathing, circulation and digestion, that our bodies use to convert food into energy”are different. That affects the way we store, gain and lose weight.

There are more overweight guys than girls, and women place more importance on health and physical appearance than men, women tend to count calories and place more value on a home-cooked meal, which affects the way they choose what to eat, found a May 2013 study published in the Journal of Business Research.

Giving the same information to men may change their perceptions of the food, but not their ultimate decision of whether or not to eat it. 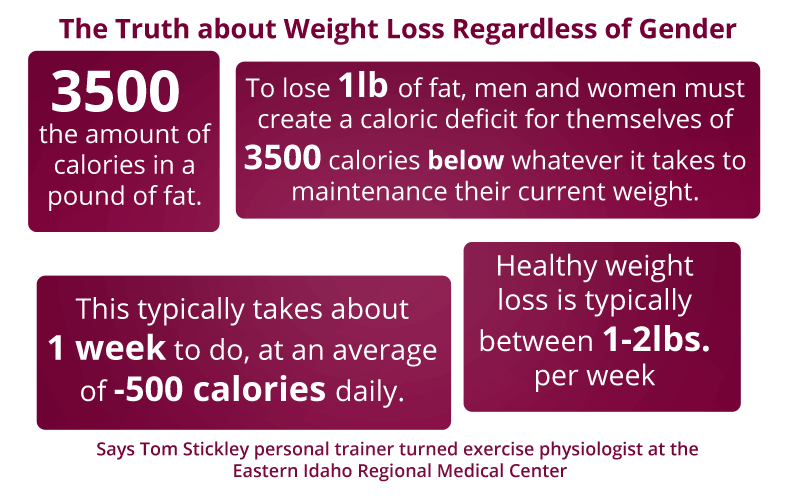 The bottom line: Women are more likely than men to make changes to their diets based on nutrition information. This can lead to healthy weight loss.

Yes, both men and women can be physically active. But men are more likely to pursue physical activity via competition or team sports, according to a November 2012 study published in PLOS ONE.

The study also found that men play sports more frequently and for longer durations than women. When it comes to non-competitive forms of exercise, the participation gap between men and women shrinks considerably.

Tom has also noticed a difference: “In my experience as an exercise physiologist and former personal trainer of 3 years, I've noticed that women tend to either overlook strength training because cardio seemingly burns more calories, or when they do strength train the intensity is so low that the benefits they desire can't be manifest.”

The American Psychological Association says that people are more successful with weight loss when they have friends supporting them.

Tom says this is especially true for women.

“Women also do better with partners and some kind of support network,” he says. “Ladies, seek support in all settings. Whether from your family, from your co-workers, or at the gym via a workout partner or group fitness class. It will be instrumental in your long-term success.”

The bottom line: How you lose weight”and how much”depends on a number of factors, including the type of exercise as well as frequency and duration. But since men are more likely to exercise in a social setting, women may have to put in some extra effort to find that social support and reap the benefits of working with friends to lose weight.

For more information about weight loss, give the EIRMC Wellness Center a call today!

How safe is the American food supply?

Is Your Spouse Sabotaging Your Weight Loss?

Winter workouts: How to stay active and exercise safely

Talking to Kids About Cancer: How to break the news to your family

Should I Get My Son the HPV Vaccine?