Discover What Happens To Your Body When You Quit Smoking

The road back from quitting smoking is a long and hard one. But you will see benefits immediately and over the long term. Anyone who has successfully completed the journey can attest to its worth.

The research continues, but a wealth of information already exists on smoking cessation benefits. According to the American Heart Association (AHA), non-smokers live 13 to 14 years longer than smokers.

Learn what other ways your health improves over time when you quit smoking.

The Benefits Of Quitting Are Apparent Immediately

About 20 minutes after you quit, your heart rate and blood pressure are restored to where they were before spiking from the cigarette, according to the AHA.

After about half a day, the amount of oxygen flowing through your blood rises as carbon monoxide levels fall.

Carbon monoxide inhibits the flow of oxygen, but it also hardens your arteries, says the AHA. That makes heart disease much more likely, since hardened arteries force the heart to work harder to move blood through your body.

Nicotine is a viciously addictive drug. It draws users in by boosting their mood. However, the AHA points out its less pleasant effects: It increases blood pressure and heart rate, and also hardens arteries.

As with any addictive substance, you will experience withdrawal symptoms after you stop using it. The US National Library of Medicine says these symptoms will peak about two to three days after quitting. 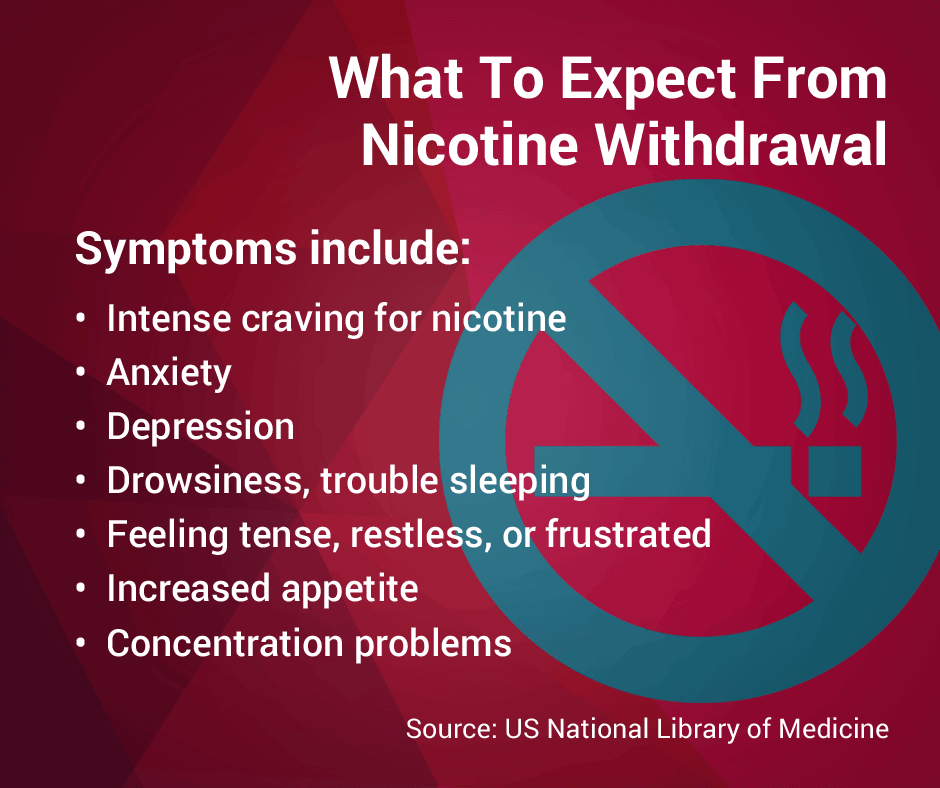 What to expect from nictoine withdrawal

SOURCE: US National Library of Medicine

Don't give up this is the time to stay motivated. Reward yourself by using the money you would have spent on cigarettes to do something nice for yourself.

The Weeks Following Withdrawal Get Better

In normal lungs, tiny hairs called cilia push the dirt that gathers out of your lungs. According to the American Lung Association, smoking destroys your cilia, and with it, the ability of your lungs to remove the dirt.

Accumulation of LDL is what causes arteries to harden, a condition called atherosclerosis, which can result in a heart attack or stroke.

Things Get Back To Normal In A Few Months

After a month, you can exercise without being inhibited as significantly by fatigue, your senses of taste and smell return to normal, and the stains on your teeth and fingernails fade, says the American Heart Association.

As you progress through that first smoke-free year, your breathing gradually becomes cleaner and deeper.

Your Risk Of Chronic Diseases Drops After One Year

Your risk of heart disease drops sharply a year after you quit smoking, according to the Centers for Disease Control and Prevention (CDC).

After a decade, the AHA says your risk of death due to lung cancer drops to half of those who continue to smoke.

Fifteen years without smoking is a big deal. By this time, your risk of developing coronary heart disease is equal to someone who has never even touched a cigarette, according to the National Heart, Lung, and Blood Institute. That's something to work toward, and it's a remarkable accomplishment.

Put Together A Plan To Quit

No one can deny the difficulty of the journey ahead for a chronic smoker looking to quit. However, understanding the benefits may encourage you to take first steps. Having a plan in place may offer you some much needed support as well.

The National Cancer Institute offers a few recommendations to help you get started:

For more information check out EIRMC's YouTube channel or read How to love your heart the way it deserves to be loved.

January 10, 2022 by Emily Paulsen
The New Year feels like a fresh start, and it's a time when many people choose to make healthy changes.
Next Post
Back to blog home

How working too much affects your heart

How sleep loss affects your health

Do not delay care during COVID-19