Women are not going to the doctor as often as men — even when they need to.

Why is this the case? Most people think it's the men who have to bribed to see a physician. Aren't women supposed to be the primary champions of healthcare in their families? Aren't they the ones who make the healthcare decisions?

That at all might be true, but there are a number of reasons why women are putting off healthcare. Here's what you need to know about why women don't go to the doctor and how it's affecting their health.

Ladies, Your Medical Care Matters Too

For a lot of women, taking care of their own health is important because they need to be well enough to help take care of everyone else, says the Kaiser Family Foundation, a national healthcare policy think tank.

Yet many women don't make their own physical and mental wellbeing a top priority. The sad fact is that women earn lower wages on average, which leads to less overall financial assets and wealth. They also experience higher rates of poverty.

These issues are then compounded by women's unique health needs, like reproductive healthcare services. The costs of which can add up throughout the course of a lifetime.

For example, women's average out-of-pocket expenses were $5,635 in 2008, compared to $4,952 for men according to the US Department of Health and Human Services. And women paid an average of $1,556 for office-based medical services, while men paid $1,323.

Because of this, women are delaying or forgoing medical care, a May 2014 study by the Kaiser Family Foundation reports.

How bad is the trend of women skipping medical care?

The Foundation surveyed 3,015 women between the ages of 15 to 64. Even when they took into account demographic factors of such as race, ethnicity, and socioeconomic status, they found the differences between men's and women's healthcare to be quite noticeable. 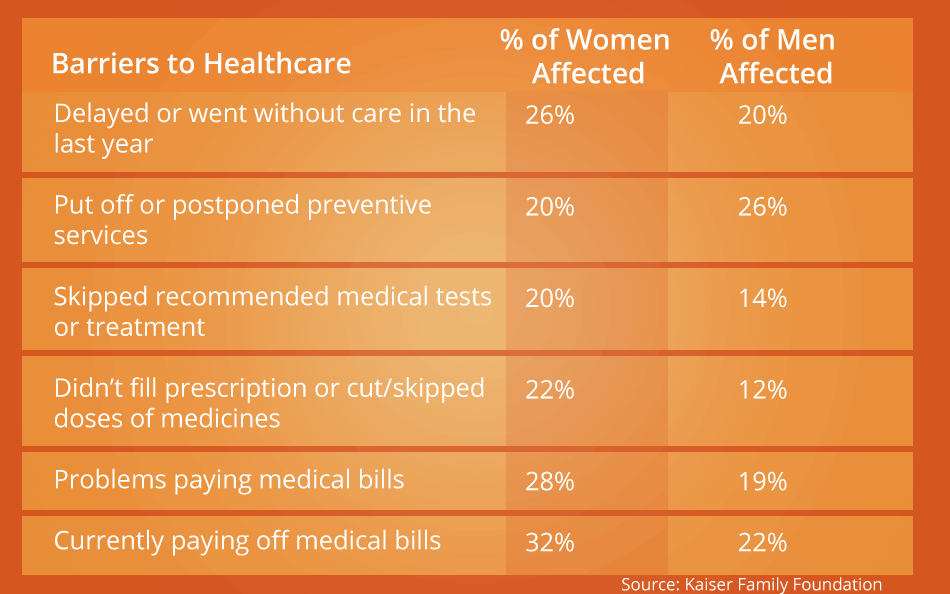 Why Women Need to Go to the Doctor

Women may be skipping out on their own medical care more often than their male counterparts, but it's definitely not because they don't need to see a doctor.

About 43% of women report that they have a chronic medical condition — one that requires monitoring, treatment or medication on a regular basis.

And nearly a third of all women — 31% — are on 1-2 prescription medications. Many doctors will not prescribe refills of certain medications unless their patients come in for a checkup.

If women don't — or can't — they may end up without medication that could affect their ability to function.

While 82% of women reported having had a recent general medical check up, only 61% had a gynecologic or obstetric exam in the past year.

What Women Can Do to Get to the Doctor 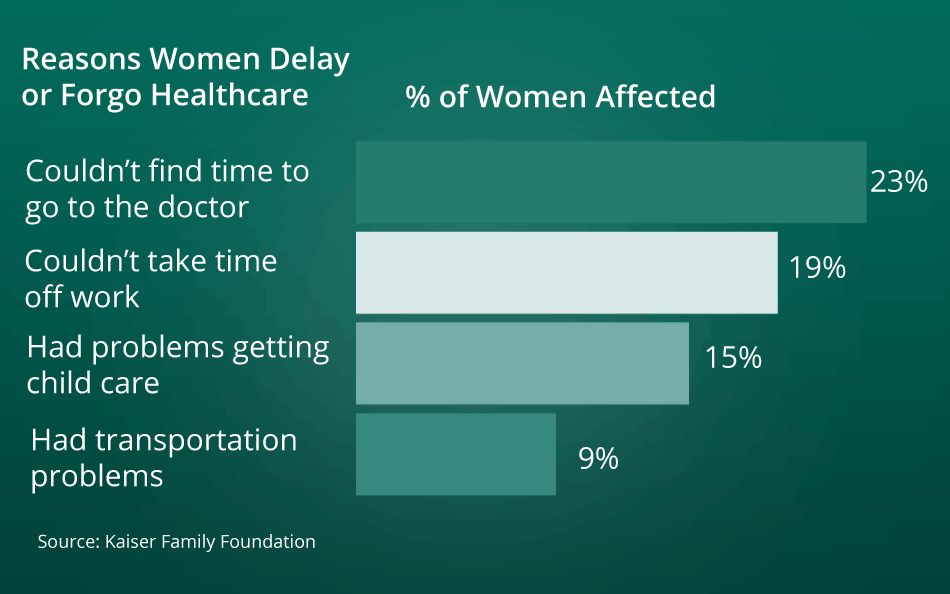 One of the main reasons women reported that they don't go to the doctor is because they just don't have the time.

But think about it this way instead: If you don't make time to go to the doctor, a minor health issue may go undetected and turn into a serious condition.

Then, there won't be time for anything — except going to the doctor. Your career, your kids, your social life — all of that will have to be put on hold because treating that condition will become your new full-time responsibility.

On a similar note, women are delaying or forgoing healthcare because they can't take time off of work. But if a health issue goes untreated and worsens, working may not even be an option.

Wouldn't it be better to take the hour now to see your doctor rather than missing days or even weeks later on?

Another reason women aren't going to the doctor has to do with lack of childcare. If you're due for an annual checkup, schedule it months in advance. That way, you have plenty of time to find a babysitter to watch your kids while you're at the doctor.

Scheduling routine care in advance can also help if you have difficulty getting transportation to and from the doctor because it gives you plenty of time to find a ride.

Ladies, when was the last time you paid your doctor a visit? Check out EIRMC.com for more information about finding a doctor in the Idaho Falls area.

June 7, 2022
Treatments and interventions for people with Post-COVID Syndrome (Long COVID).
Next Post
Back to blog home