5 Misconceptions People Have About Hookah Smoke

A hookah is a water pipe used to smoke a special type of flavored tobacco. Charcoal-heated air is passed through the tobacco (which resembles paste and is packed into a bowl), through the water at the bottom of the hookah. The smoker then takes up the tobacco via a hose and mouthpiece.

Smoking hookah is a growing US trend, most popular among 18- to 24-year-olds. Underaged smoking, however, has also recently become more common”with both high school and middle school kids. Hookah smoking is very attractive to the younger generation for a few reasons:

Its popularity is the prime reason why this is such a troubling trend”it is being misconstrued by the public as a safe option. The ongoing research on hookah smoking, however, labels it as anything but.

Here are the top 5 myths associated with smoking hookah:

It's Healthier Than Smoking Cigarettes

Hookah smoke is at least as bad as smoking cigarettes. The American Cancer Society (ACS) says that it is definitely not a safe alternative. The combustion of the charcoal or wood used to heat the air causes the creation of additional cancer- and heart disease-causing agents within your body. 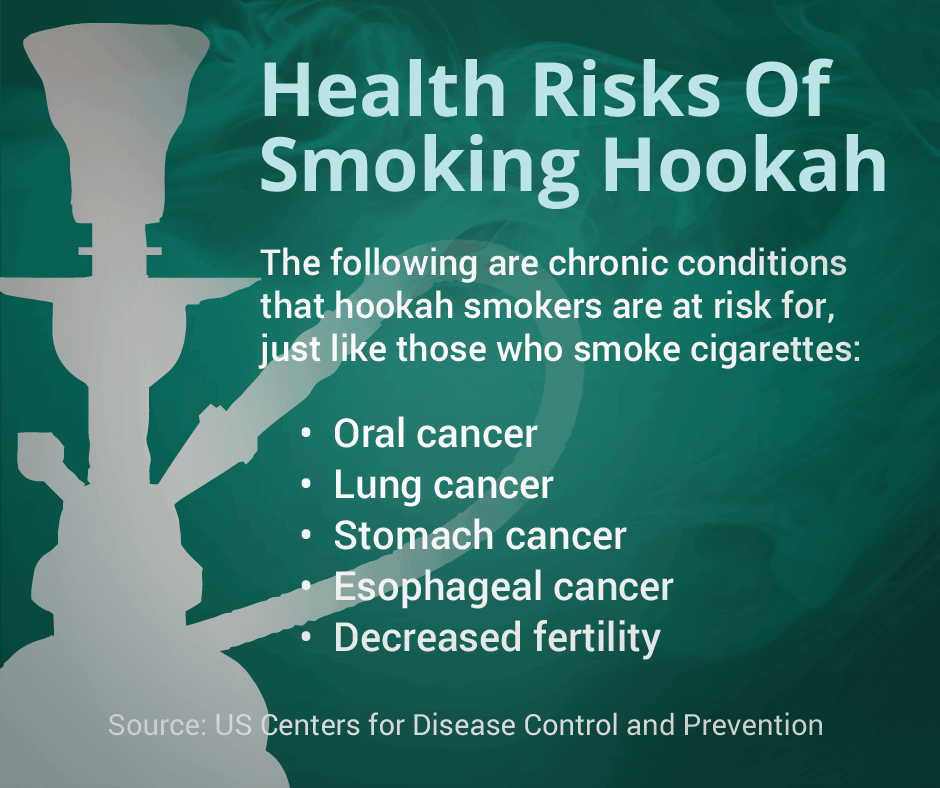 The following are chronic conditions that hookah smokers are at risk for, juar like those who smoke cigarettes.

SOURCE: US Centers for Disease Control and Prevention

Since The Paste Used To Pack The Bowl Is Fruity, Then It's Okay.

Wrong. Some believe this paste, called shisha, is mostly molasses and contains little tobacco. In reality, the fruity smell is used to cover up the tobacco content of shisha. As noted in myth No. 1, hookah smokers are at risk for many of the same conditions as cigarette smokers.

Water In The Hookah Filters Out A Lot Of The Nicotine.

It sure would be nice if this were true. Unfortunately, the American Lung Association (ALA) points to research that says that the water filters out less than 5% of the nicotine from the shisha.

You Can't Get Secondhand Smoke From Being Around Others Smoking Hookah.

Wrong again. This misconception is the main reason why hookah lounges springing up across the country have been able to get a pass on smoke-free laws. The CDC calls secondhand hookah smoke unsafe and a health risk.

November 28, 2022 by Tayla Holman
With the holiday season upon us, many people are gearing up to spend time with loved ones and indulge in holiday meals. But for some, the holidays...
Next Post
Back to blog home