Quitting smoking is not like remodeling your basement or saving for retirement. It's not something to put off until you can get around to it. Actually, quitting smoking is “the most important behavioral change” you can make to benefit your health, according to the Centers for Disease Control and Prevention (CDC).

But, quitting smoking is easier said than done.

More than two-thirds of all smokers in the United States want to quit. In November 2011, the CDC reported that more than half of all adult smokers had tried to stop, but only 6% were successful.

Why is the amount of smokers who successfully quit so small? Here are 3 reasons why smokers don't quit”and what you can do if you or a loved one smokes but wants to quit.

A large part of the reason quitting smoking seems so difficult is based on fear, namely the fear of weight gain.

Former smokers gain between 8 and 14 pounds on average during their first year after quitting, according to a January 2014 study in the International Journal of Clinical Practice. About 53% of the smokers surveyed had tried to quit in the past and found themselves gaining weight.

This is why some smokers give up before they even try to quit”they don't want to gain weight.

If you want to quit smoking but are concerned about weight gain, talk to your doctor about nutrition counseling during the process or immediately after you've kicked your habit. The important thing is to tackle one health challenge at a time. Quitting smoking should be at the top of the list. Then, focus on the weight gain.

Another fear-based reason that smokers avoid quitting has to do with triggers.

Triggers are “activities, feelings, and people” that you mentally associate with smoking, according to the U.S. Department of Health and Human Services. These triggers may make you want to light up.

Identifying your triggers is a good first step in overcoming them. You want to make a clear connection, such as “when I feel this way or see this person, I feel the urge to smoke.”

After you've identified the trigger, give it about 10 minutes to see if the urge to smoke goes away. If waiting it out doesn't work, have another distraction plan, like calling your daughter who's been begging you to quit, or taking a walk to a place that doesn't allow smoking.

Nobody starts smoking with the intention of developing a nicotine addiction, but that's usually what ends up happening.

Your body becomes dependent on nicotine and you eventually end up needing even more of it to get by, explains the U.S. Department of Health and Human Services. If you don't give your body the nicotine it craves, you may experience withdrawal. 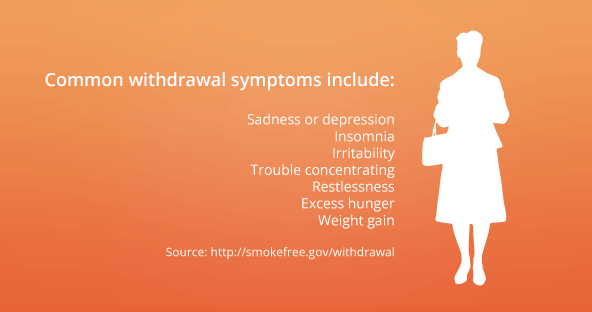 The important thing to remember is that quitting smoking is not a solo activity. It's a team sport. Your doctor, a support group, and all those family members who have been nagging you to quit are great sources of support.

Find an EIRMC physician to help you quit smoking, for good this time.

How to advocate for yourself with your physician

Folic acid deficiency symptoms: Should you talk with your doctor?