Take Me to EIRMC: Where William's Life Was Saved 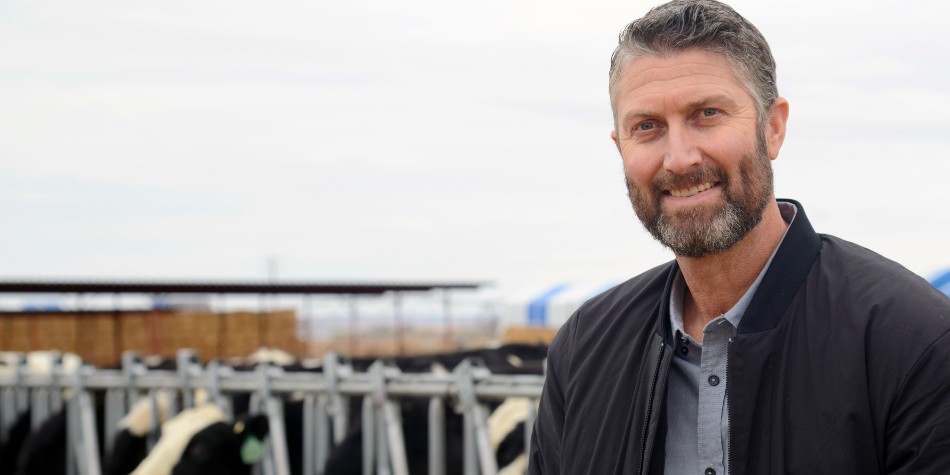 William DeJong, of Jerome, Idaho, was moving cows in a hurry. He’d maneuvered like this for 20 years, and as a dairy farmer and self-proclaimed “doer,” he was getting things done ... until his life suddenly came undone.

Just as a large, full feed truck backed up, William tripped, hit the bumper and fell. The nearly 30-ton truck ran over William, crushing his femurs and tearing the skin from his legs. Employees immediately began yelling at the driver, who quickly pulled the truck forward to get out of the way, running over William yet again.

While employees stood in shock, some crying and some yelling, William saw his demolished legs and began shouting orders, “Call 911! Call my wife! Bring me a belt to stop the blood!”

“I was bleeding out and in pretty bad shape,” William remembers. “Thankfully, my manager Brandon kept a cool head. He’s the one who told the 911 operator that we didn’t need an ambulance, we needed Life Flight.”

Even by helicopter, it took an hour to arrive at Eastern Idaho Regional Medical Center (EIRMC). During the flight, William passed out from loss of blood and slipped into a coma.

“As we got closer to the hospital, dark storm clouds covered the horizon,” Renee DeJong, William’s wife, said. “I asked the pilot if we’d even be able to land. Miraculously, a small opening in the clouds formed right over the hospital. Rays of sunshine literally shined down on the hospital! That’s when my anxiety was replaced with confidence. I didn’t know at that moment if William would live or die, but I knew God was with me and that whatever happened was going to be ok. I knew we were at the right place. This ended up being the best hospital for him.”

EIRMC serves as a regional leader in emergency, wound care and trauma services. Plus, the hospital opened Idaho’s only burn center last year. After emergency physicians stabilized and intubated William, he received care in the new burn center’s ICU.

“William lost most of the skin on both legs and needed multiple skin grafts and intense wound care, so he was treated like a burn victim,” Renee explained. “The first few days I heard the words, ‘Life over limb’ often. The hospital team wanted to save his legs, but they really wanted to save his life. To do that, they needed to fight infections and stop the bleeding.”

William’s accident took place in a hay alley, with feed and manure and all sorts of germs. To clean his wounds and ward infections, William, while still in a coma, underwent multiple cleansing procedures and oxygen-enhancing hyperbaric chamber sessions.

“EIRMC has the only hyperbaric chamber in Idaho that can accommodate a person who is intubated. The hospital team had to change all his tubing every time he entered the chamber, so it was a big ordeal, but they did it because it helps with wound healing. The goal was to get him there daily,” Renee said.

Overall, William underwent 36 hyperbaric sessions and 14 trips to the operating room, for skin grafts and cleansing procedures. Before he awoke from his coma, surgeons carefully amputated his left leg below the knee. He also received more than 104 units of blood during his hospital stay, replacing his entire blood volume several times over.

“I was in utter shock and disbelief at how complex his care was,” Renee said. “The doctors and nurses worked tirelessly. They knew what they were doing and fought for him. I trusted them. In fact, I’ve never bonded to people so quickly. The nurses and doctors were my lifelines. When I cried, they gave compassion and sat with me. When I asked questions, they took time to explain things. They walked the road with me.”

“I wouldn’t be here today if it wasn’t for them,” William said. “This has been a huge team effort and I’m very humble and grateful for that. So many people have prayed. So many have cared and stepped it up – friends, employees, EIRMC teams and family.”

Thanks to dedication, compassion and hard work from all his teams – and William himself – William now walks with one prosthetic foot and two bandaged, healing legs. He’s even driving his pickup truck, with specialized hand controls. Yet his favorite thing to do is spend time with his three children and wife.

“I look at my kids differently now. I get a little more teary-eyed. I’m so thankful to watch them play sports and continue watching them grow up. My wife has been a saint. Her unconditional love for me has been absolutely wonderful. I’m more thankful and more appreciative than ever,” William said. “From the accident to now, my life has completely changed. Before the wreck, I took things for granted; after the wreck, I rely on people – and the people, they’ve been truly amazing.”

Pulmonary hypertension and ways to support your...

Learn more about pulmonary hypertension and how to support your health under this condition.

5 sugar-free ways to make your food (and life) sweeter

The School Year is Coming – Is Your Child Vaccinated?

The Scoop on Baby Poop

Could a supplement help keep your mind sharp?