Does Media Violence Cause Children to Become More Violent?

Columbine. Sandy Hook. Virginia Tech. These schools all have something in common - shootings.

When tragedy strikes in the world of America's young people - especially when the tragedy is perpetrated by the young people themselves - the public wants something to blame for the violence.

The culprit is often the abundance of violent acts that kids are exposed to on TV, movies and video games.

But is there any merit behind these claims? Does media violence cause kids to become more violent?

Violence in TV shows, movies and video games is often portrayed as a positive way to resolve conflicts. Think of all of the heroic cartoon characters, from Wreck It Ralph to Peter Pan, who are rewarded for committing violence.

The average American kid witnesses more than 200,000 violent acts in the media - including over 16,000 murders - before her 18th birthday. 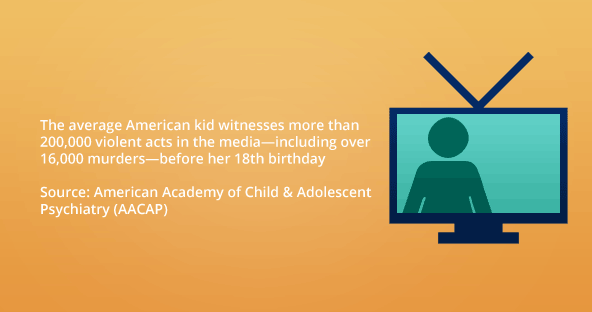 Kids who witness violent acts in the media become desensitized to seeing it onscreen - a fact not really up for debate, says the AACAP. What is unclear, however, is whether this leads to real-life violence.

Here's what the latest research says about whether media violence causes kids to become more violent, and steps you can take as parent to make sure your kid knows what's real from what's onscreen.

On one hand, some evidence suggests that exposure to media violence does indeed make kids more violent.

The effects of violence in the media may actually be underestimated, according to a July 2012 study published in Psychology of Popular Media Culture. The study's authors suggest that the effects of media violence on kids should be looked at in the context of the individual children's risk and resilience factors - things like parental involvement and the likelihood of being a victim or perpetrator of violence.

Additionally, a January 2013 study in Aggressive Behavior reported that kids who played violent video games showed higher levels of aggression when compared to their peers who played non-violent games. In the study, aggression was defined by how long and how loud a player would blast his companion with noise after playing a video game. The findings also suggest that the reason violent games can lead to increased aggression is because they induce a stress reaction in the players.

Children's television programming, especially cartoons, depicts as many as 20 violent acts every hour 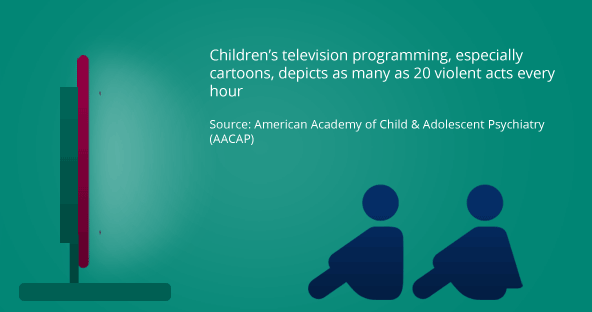 On the other hand, media violence may not actually make kids more violent.

Researchers reported in the January 2013 issue of the Journal of Youth and Adolescence that exposure to violent video game content had neither positive nor negative effects on children in the short or long-term.

Similarly, a February 2011 study in Psychology of Violence found that violent video game content was not the cause of players' aggressiveness. However, the intensity of the competition in the game - regardless of violent content - did increase kids' aggression.

Research published in a May 2012 article in Cyberpsychology, Behavior and Social Networking took this stance: The context in which the game is being played - like whether the players are cooperating with each other or competing against each other - is more influential than whether the game is actually violent.

Here's what you can do to reduce their children's exposure to violent media.

A December 2012 article in Psychology Today also lists a number of ways to monitor your child's exposure to media violence, including:

Only expose them to age- and personality-appropriate media

Yes, personality appropriate. If you know your child is especially impulsive or aggressive, don't let him watch action movies all weekend. Or if you find that letting him get his aggression out in the digital world calms him down, pick an age-appropriate game for him to play.

Set limits on what your kids can play or watch and for how long. The American Academy of Pediatrics advises parents to limit kids' screen time to 1 or 2 hours a day.

Watch movies and play video games together. Then, use these opportunities to talk to your kids about violence in the media.

This last point is probably the most important one to keep in mind. If you create an open dialogue with your kids about this issue - how exposure to violent acts in the media affects them, healthy ways for them to release anger and aggression, and ensuring they enjoy age-appropriate content - you can be part of the effort to take steps towards ending youth violence.

If your family has been seriously impacted by youth violence, reach out to EIRMC's behavioral health experts for support.

Could your baby have RSV and should you take them to the ER?

Why you should keep your child's scheduled checkup appointment

Are you ready for kindergarten?

How to prevent leaving children in hot cars