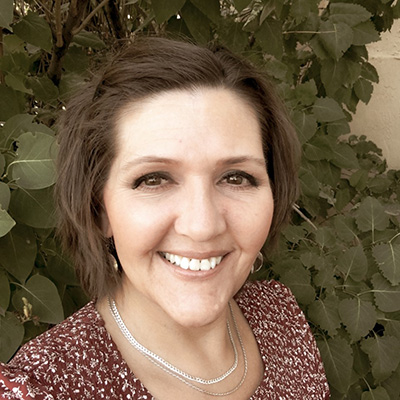 “Looking back, I had symptoms, but I didn’t know what they meant. I just thought I was having strange, early menopause symptoms,” says Tawnya Stosich about the pelvic pain and extra heavy menstrual periods she began experiencing in 2017.“Many women with endometrial cancer die because they don’t recognize the symptoms. I want to share my story to let other women know about this cancer.”

Tawnya’s story began when bloodwork during a routine physical showed that she was anemic, possibly the result of unusually heavy periods.

“Because I didn’t have insurance, I hadn’t been to the doctor in a while. A cousin told me that I probably qualified for Medicaid, so I applied and was accepted. That turned out to be a huge blessing!”

The bloodwork was the first domino, leading her to seek out care from Dr. Steven Robison, an OBGYN in Idaho Falls. More dominoes fell, as Dr. Robison’s exam revealed a benign cervical polyp. However, to verify whether the polyp was Tawnya’s only issue, and to locate the cause of her pain and excessive bleeding, an ultrasound was ordered. It showed several large uterine fibroids, benign tumors that can cause heavy menstrual bleeding. For Tawnya, a hysterectomy was the best treatment.

“So, this was the real blessing of having Medicaid: before having a hysterectomy, Medicaid requires a uterine biopsy.”

Not long after the biopsy, Dr. Robison called to schedule a visit with Tawnya.

“He told me I had uterine cancer, endometrial cancer. Stage 3. It was such a shock! You never think it’s going to be you with that diagnosis. Still, I went to work that day. I couldn’t just sit home all day and feel sorry for myself.”

This positive get-up-and-go attitude, along with the support of her family and friends, helped Tawnya through the surgeries and treatments to come. Diagnostic CT scans indicated that the cancer had spread. To get the right care, she needed to see a specialist, so she was referred to Dr. Karen Zempolich, a gynecologic oncologist in Salt Lake City, to develop a treatment plan.

“Only 12% of the cancer was in the lining of my uterus. The rest was throughout my lymph system, including two lymph nodes close to the aorta. After my hysterectomy, I needed radiation and chemo to get all of it.”

Tawnya’s cancer treatments were done at the Idaho Cancer Center at EIRMC, supervised by Dr. Dan Miller. Through it all, Tawnya and her care team grew close.

“I feel like I won the lottery in terms of caregivers. I love them! The doctors and nurses are amazing. You’re so vulnerable in that place, but they were so loving, nurturing, and caring that they felt like family. They made it seem easy and it was always a positive experience for me.

“And I did miraculously well. There was some neuropathy and some leg pain, although I was still able to work. I tried hard to keep a positive attitude all the way through. When my hair started falling out, that was the most difficult experience emotionally. Because as women, we place so much importance on our hair!”

Through the process of radiation and chemotherapy, Tawnya gained a whole new perspective and appreciation for the body and its ability to repair and heal itself, even its ability to regrow hair.

“Our bodies are truly amazing, even though they are fragile and susceptible to diseases.”

With cancer behind her, Tawnya has a strong desire for other women to get educated about the types and symptoms of cancer that they may experience as they get older.

“During that first visit to Dr. Zempolich, while sitting in the waiting room, I found a brochure about endometrial cancer. When I read it, I realized that I had had the symptoms for quite a while. But I had no idea they were symptoms of cancer. I just thought it was really bad symptoms of early menopause.”

Endometrial cancer is the most common form of uterine cancer. In America, approximately 50,000 women per year are diagnosed with it. And, as Tawnya discovered, many of those women don’t find out soon enough. Her advice to other women is “pay attention to your body. If your periods change, even though you’re starting into menopause, talk to your doctor about the changes. You never know, it might be cancer. I wish that a uterine biopsy was a standard test for women in their 50s.”

The most common symptom of endometrial cancer is bleeding or discharge not related to menstruation; over 90 percent of women diagnosed with endometrial cancer have abnormal vaginal bleeding. Other symptoms include postmenopausal bleeding, difficult/painful urination, pain during intercourse, pain and/or a mass in the pelvic area. All of these symptoms can be related to conditions other than cancer, so it is important to see a doctor.

“There are amazing new technologies to treat cancer,” said Tawnya. “I wasn’t too scared because I knew I was in good hands at the Idaho Cancer Center at EIRMC, and I found out about the advancements in cancer research and technology that would help me.”

With her typical positive outlook on life, Tawnya says she is grateful for her cancer experience. She gained new empathy for other people, especially other cancer patients and survivors. She also has a new perspective about life’s challenges.