Everything Goes Right to Save Ernie After His Stroke 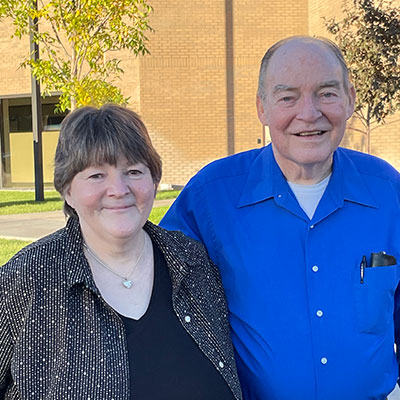 Most people are familiar with Murphy’s Law: If anything can go wrong, it will. But there’s no name for the opposite of Murphy’s Law, which would be “if anything can go right, it will.” If such a law exists, newlyweds Vernon (Ernie) and T Watson surely saw it in action on August 10, 2022, when Ernie had a stroke in their backyard and everything went perfectly right to save his life.

“T’s two sons and her daughter, Tracy, had come to town, and we were all supposed to leave the next day to go camping,” said Ernie. “I had just finished chopping wood to put in the RV and had taken the cart back to the shed. That’s when my leg went all wonky, like I was losing strength. Then my arm and leg quit working, and I couldn’t speak.”

Just as this happened, Tracy went out to check on Ernie. Because she’s an experienced physical therapist who works with stroke patients, Tracy immediately recognized the symptoms and called 911. In minutes, an ambulance arrived.

Being unfamiliar with area hospitals, T asked the EMTs to recommend the right hospital. They said that Eastern Idaho Regional Medical Center is best equipped to treat strokes; even if she chose another hospital, they said he would likely be transferred to EIRMC anyway because other hospitals in the area do not have the same capabilities to treat stroke. In fact, EIRMC is a Primary Stroke Center as accredited by the Joint Commission.

So, that’s where they took Ernie, calling ahead to the ER to initiate stroke protocols. “They were prepared to treat him when he arrived. Everyone was waiting for him,” says T. “He got clot-busting medication right away, and they prepped him for a procedure. Those clot busters worked so fast that Ernie started trying to get out of bed!”

“It felt like I was behind glass. I could see, but I couldn’t speak. And I don’t remember a lot,” explains Ernie. “But I remember hearing a woman’s voice saying that I was going to have surgery and everything would be all right.”

In the waiting room, T prayed for a miracle. “I lost my first husband just a few years ago, and I couldn’t go through that again. We haven’t been married that long, and it just seemed so unfair. I guess someone was listening to my prayer.”

While other doctors watched Ernie’s procedure remotely in real time, Dr. Christopher Harker, an interventional and diagnostic radiologist, used a suction catheter to snag the blood clot in Ernie’s brain and safely remove it. The procedure went so perfectly that the doctors who were watching all spontaneously applauded.

In fact, Ernie’s stroke was handled so perfectly by every person involved in his care that the EIRMC stroke team has used his experience to develop a case study for teaching other hospital stroke teams.

“I’m really glad to be the poster child for what happens when everything goes right,” says Ernie. “The doctors, the EMTs … they all performed a miracle for me.”

T and Ernie have pondered all the “what ifs” of his stroke experience. What if Tracy hadn’t been there? What if she hadn’t gone out to find him at that very moment? What if the stroke had happened while they were camping, two hours away from everything?

Ernie’s stroke was treated so well and so quickly that he has hardly any after effects. The residual weakness on his left side is expected to completely resolve in time, which means these two retirees have many years ahead to check off some Bucket List items.

“We have more life to live, and we want to do it now!” exclaims Ernie. “If we think of something we want to do, we just get out and do it, instead of procrastinating. Live life to the fullest!”