Take me to EIRMC: They delivered and cared for my micro-preemie with major expertise 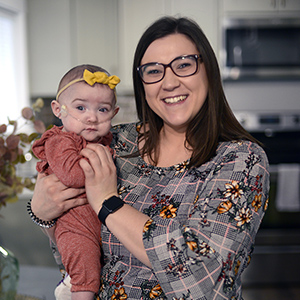 Brandie Tagg figured an awful acid reflux spell caused her middle-of-the-night chest pain, but when she stood up to walk it off, the feeling shot down into her pregnant belly. As the pain intensified, she knew she needed emergency medical care.

“When I arrived at the ER in Rexburg, I was crying and in a lot of pain. I told the person behind the desk, ‘Something’s wrong with me!’ and the employee said they’d get a nurse to make sure I wasn’t in labor … That’s when I started to freak out more – I hadn’t thought labor was a possibility,” Brandie said.

EIRMC: Equipped for the smallest patients

Brandie went by ambulance to EIRMC. When she arrived, her blood pressure was 190/100. Doctors diagnosed her with pre-eclampsia, a potentially dangerous complication characterized by high blood pressure, and HELLP syndrome, which usually requires delivery of the baby.

“I was definitely scared. I remember texting my family saying, ‘I am trying to figure out if I should be excited to see my baby in the NICU or If I should be looking for an outfit to bury her in.’ I knew she’d be delivered early, but the statistics were not good. There was only a 30 percent chance she’d live,” Brandie said.

Although the situation’s severity stayed ever present, Brandie found hope in the extensively trained physicians and staff at EIRMC. They explained that the EIRMC NICU provides neonatal care for the smallest patients, born as early as 23 weeks.

“I never felt isolated or forgotten. They showed genuine interest in me, answered my questions and it felt like I was in a safe and happy place, regardless of the circumstances,” Brandie said.

Five days after arriving at EIRMC, Brandie’s blood pressure spiked again, alerting physicians that at 23 weeks and 6 days gestation, it was time to deliver the baby via emergency C-section.

“It all went very quickly,” Brandie said. “I remember the doctors saying she was a little miracle. She made a meow when she was born, and the doctor just couldn’t believe that she made a noise. He said that was a miracle too!”

Baby Ruth weighed just 15 oz. and measured 10.5 inches long. Her diapers were the size of a debit card, and her body needed help breathing, regulating temperature, feeding and more. Thankfully, EIRMC’s NICU has the equipment, team members and environment that a micro preemie needs for growth and development.

The right people in the right place

Brandie and Chapman drove from their Rexburg home to Idaho Falls to check on Baby Ruth’s daily progress. Some days were tougher than others – like the day Ruth’s stomach swelled up like a balloon, discolored and distended.

“She had a perforated bowel, meaning she had holes in her intestines and was leaking internally. They told us that if she didn’t have surgery that day, she wasn’t going to make it … Dr. Curnow came in and we said a prayer together,” Brandie said. “I knew she was in such good hands. One time he told us, ‘I’ll treat your baby as if she’s my own granddaughter …’  I had so much peace from that. I mean, I was still terrified, but I knew the right people were there, and they were doing everything they could for her.”

Ruth survived that surgery, plus five more surgeries while in the NICU, and another after going home.

Ruth spent 201 days in EIRMC’s NICU.  During that time, Brandie says they came to love the place and its people.

“My husband would tell you that the NICU is way too happy. At first, he couldn’t stand it. Why were they so happy when they were taking care of sick babies? But after a while, he understood why they were so happy – they had to be. The parents need it. The babies need it. He became so grateful for their happiness. He actually wrote them a letter about that,” Brandie said. “That’s just how they are – it’s more than medical over there. It’s like family.”

The contagiously cheerful and compassionate culture is one of a million reasons Brandie says, “Take me to EIRMC.”