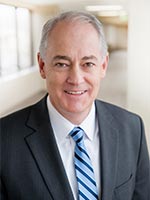 Judd was born and raised in Idaho, and his roots run deep in the Gem State. He attended Utah State University and worked in public accounting in Idaho Falls for four years before starting his career in healthcare.

In 1997, Judd joined EIRMC for the first time and spent six years here as the Cost Accountant, Managed Care Negotiator, and Controller. He then spent three years at West Valley Medical Center in Caldwell as the CFO before moving to Utah, where he was the CFO at Ogden Region Medical Center. Judd served in this role until 2017, when he moved back to Idaho to rejoin the EIRMC team as Chief Financial Officer.

Judd enjoys fly-fishing, hiking, skiing, wakeboarding, running and many other sports. He is married to Becky and they have three sons who love to play baseball and basketball, and one daughter who loves animals.